Posted in: Dave's Message (Blog), News, Videos
Tags: front runners, front runners pan am games, frontrunners, frontrunners of 1967, frontrunners winnipeg pan am games 1967, host nation pan am games, indigenous pan am games, pan am games 2015, pan am games opeining 2015, pan am games opening ceremonies 2015
Mississaugas of New Credit First Nation Honours the Original Frontrunners at Pan Am Games Opening Ceremony 2015 The Mississaugas of New Credit First Nation, one of the four Indigenous host Nations of the Pan Am and Parapan Games 2015, presented a celebration of culture, tradition and entertainment at a Gala Celebration in honour of the Frontrunners of 1967, at the Fort York National Historic Site on July 9, 2015. On July 10, at the Pan Am Games Opening Ceremony with the Original Frontrunners in attendance, they lit three sacred fires at Toronto Island, New Credit and at Fort York (all on traditional Mississauga territory), to be kept burning throughout the entirety of the Pan Am and Parapan Games.  The Frontrunners participated in a Canoe Journey from Olympic Island (Toronto Island) back to mainland in the early morning of July 10. The Frontrunners were guests of honour at the Opening Ceremonies of the Pan Am Games in the evening of July 10.   The Frontrunner Story – Pan Am Games 1967 (Story adapted from CBC News) The torch for the 1967 Pan Am Games in Winnipeg was run from St. Paul, Minnesota. Ten indigenous young men, the Frontrunners, all track and field star athletes from their respective communities and residential schools, were chosen to run the torch to Winnipeg. The five-day, 800-kilometre odyssey led to the gates of the Winnipeg stadium where they were told to hand the torch over to a non-indigenous runner who carried the flame inside. As the crowd cheered, the Frontrunners were taken to the old Pancake House at Polo Park for breakfast and subsequently shipped back to their respective residential schools. 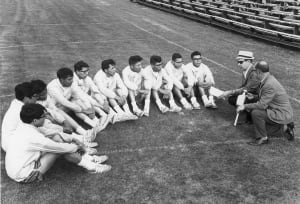 Aboriginal teenagers brought the torch from St. Paul, Minn., to Winnipeg, only to have a white athlete take the glory lap in 1967. (Canadian Press)
Thirty-two years later, Manitoba apologized for that transgression and seven, surviving Frontrunners participated in the opening ceremonies of the 1999 Pan Am Games. Dave Courchene held the torch as they entered the Winnipeg stadium in ceremonial canoes. As Charlie Nelson would later say, they “finally got to complete the journey.”   Presentation by Frontrunner Dave Courchene at Mississaugas of New Credit Pan Am Games Gala Celebration, July 9, 2015 Boozhoo, Dinaymaginitook. I wish to first of all acknowledge the ancestors and the traditional unceded territory of the Mississauga Nation where we are standing. Miigwetch on behalf of the Front Runners for this invitation by the Mississaugas of New Credit First Nation. We are the Original Peoples, the roots of our homeland. Our ancestors have returned to remind us that we are the true leaders of our homeland. We are in a time of fulfillment of prophecy, that foretold of this time of change that we have entered. It was said that we as the Original People would find ourselves being propelled into the forefront, acting as the leaders in a movement. Central to the movement would be the sacred fires of our Nations. We must come to realize the sacred importance of the element of Fire. We must rediscover its spiritual meaning. It would be the sacred fires that would hold the knowledge that would support our leadership. It would be the fire the ancestors would use to reach us, to guide us, and to bring a message. As frontrunners we were carrying that fire, and within the essence of that fire I believe was a message. We have to embrace our true identity as a people by accepting to be the true leaders of our homeland. With this leadership comes duties and responsibilities. It is not a political leadership. It is a spiritual leadership that models the teachings and values that our ancestors lived and survived by, without destroying the land. The way of our ancestors was to always be aligned with the laws of Nature. This alliance with Nature will ensure that our voice is heard and leadership established. We must bring that alliance with Nature back. This will ensure a future for all children. Nature’s force will be the determining factor that prevails to ensure the Earth survives man’s destructive nature. The issues such as climate change we face today require a spiritual, moral, and ethical resolve. Our leadership can provide that. Recently the Pope said, “Indigenous people hold one of the keys to the solution for the climate crisis.” Through the message of the fire we are being encouraged to return to the beginning. The beginning is the Spirit, and it is the land that offers the fullness of spirit. Our ancestors were able to hear the voice of the land through Nature itself. This truth is held within the arms of Mother Earth. As we make our journey to the land we must take our children with us. We must take the children to the land. To feel the land, to heal from the land, and to retrieve the teachings from the land that can help them reconnect them to the land. This will ensure their survival. We must take our children beyond this culture of war against the Earth and against each other. As runners, we were able to catch the natural rhythm of the land – the heartbeat of the Earth. It was what gave us strength and endurance. It was all about connection – a sacred relationship with the Earth. Recently an ancient footprint was discovered dating back 10, 500 years ago of two adults and a child, interestingly found around the pit of a fire. This clearly establishes that we are the Original People of our homeland. From the beginning, the fire has always carried the memory of our ancestral ways and the Original Instructions we were given by the Great Spirit on how to be a human being, living from the heart, expressing kindness. We need to bring these back. Light the sacred fires again in our homeland! The fire has the power to burn away the negative that has crept into our hearts and our minds. Light the sacred fires to allow the entrance of our ancestors to lead us out of this insanity that we are surrounded by. We will make a quantum leap forward in our spiritual evolution when we are able to rediscover the full meaning and power of the Sacred Fire. We as a people can lead and help bring peace back into our homeland, and the whole world will follow. Let the love for our children be the motivation for direct action, a journey that begins by letting the sacred fires as we return to the land, as we express gratitude for the blessings that we receive from the Earth. One of our past leaders, Crazy Horse, spoke and said:

Upon suffering beyond suffering, the Red Nation shall rise again.

It shall be a blessing for a sick world.

We will not be able to continue to hide behind the reality of this insanity we are living today. We must remove ourselves from those that imposed themselves and became the gatekeepers of our lives. It is our time to be the drivers of our destiny. Our destiny as a people is in our hands. All we need to do is follow the trail and the footsteps of our ancestors, who were led by the Spirit into the future. Let us reclaim our full right of leadership. Do we have it in our hearts to fuel the fire in our hearts and do the right thing to fully express in action the love we have for the land and the love we have for all children? The choice is ours to make. Miigwetch. Dave Courchene was the Frontrunner in 1967 who did the last lap of the run with the Pan Am Torch to the doors of the Winnipeg Stadium.  There the torch was taken from him and the Frontrunners prevented from entering the stadium.  In 1999 Dave Courchene carried the Pan Am Games Torch into the Winnipeg stadium as the 7 original surviving Frontrunners entered the stadium in ceremonial canoes.  30 years after they had run the torch and had been prevented from completing their journey, Dave passed the flame to a young First Nation athlete, who, together with White athlete, lit the cauldron for the 1999 Pan Am Games. A video link to this presentation will be available soon.

The FrontRunners: A Story of Ten Indigenous Runners in Canada

There are no comments published yet.

Did you added your own Google API key? Look at the help.

Check in YouTube if the id PL_wQ7QfAR0HxXHQdMOM_3RLNot9QOX-ik belongs to a playlist. Check the FAQ of the plugin or send error messages to support.

Get Social with the Turtle Lodge

Welcome back to the Turtle Lodge!
If you have trouble signing in, please send an email to turtlelodge@mts.net.